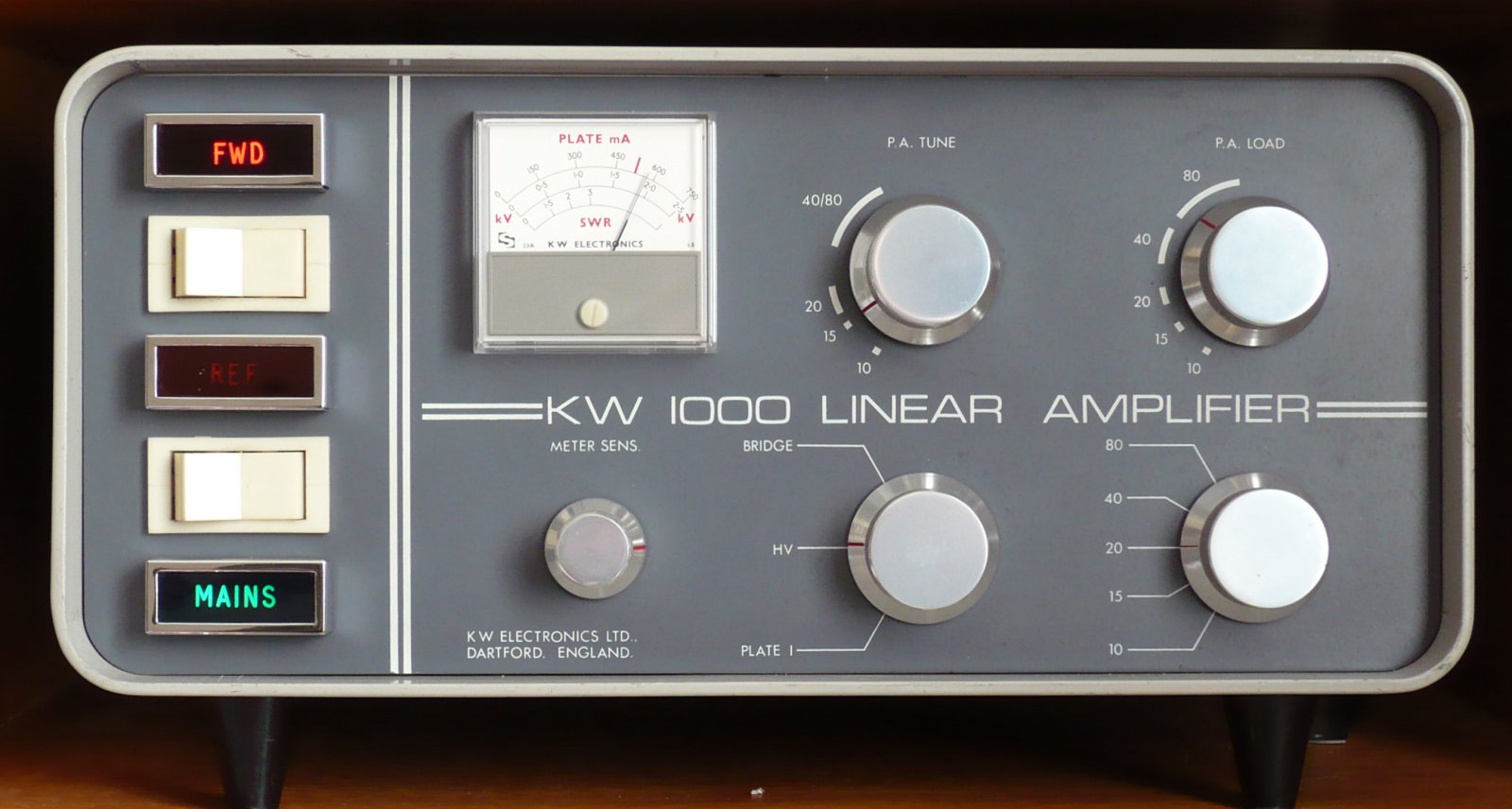 The KW1000 amplifier was produced by KW Electronics in the UK in the 1970's. It is very similar electrically and mechanically to the Heathkit SB200 and Yaesu's FL2100 amplifiers.

A pair of 572B/TL160 triode valves (tubes) are horizontally mounted in a compact cabinet which also includes the high voltage power supply. The valves are run in grounded grid configuration and require 50-75 watts drive to produce an output of about 600watts CW. Peak SSB output will be slightly higher.

A word of warning. These amplifiers depend on high voltage power supplies for correct operation. If you intend to carry out any work on one you should know what you are doing.

The amplifier pictured above was purchased from a well known DX'er who was having a clear out of some older equipment. The very reasonable price allowed a generous budget for refurbishment and despite warnings that it had emitted smoke when switched on for the first time in many years, no evidence was found that anything was seriously amiss.

The first task was to clean and oil the fan which was slow and noisy - a fairly simple task once the tubes were removed. The next area that required attention were the smoothing capacitors and the bleed resistors. The original capacitors were down to less than half their nominal value and were replaced with modern types. Values were increased from 100uF to 330uF and the new ones are about a third the height of the old ones. The original 33k bleed resistors dissipated a lot of heat and were replaced with two 150k resistors in parallel across each capacitor. At the same time all four small electrolytics in the bias power supply were replaced, increasing the voltage from -10v to a more reasonable -30v.

As received the FWD power illumination was not working and very little power (both forward and reflected) was being registered on the meter. Checks with an external DMM established that the rocker switch was not making proper contact. With some trepidation I set about opening up the switch, but it all came apart fairly easily and following a clean of the internal contacts, normal service was restored.

The pair of Cetron 572B's fitted were probably the originals supplied with the amp and proved to be a little 'tired' when tested into a dummy load although still capable of almost 400 watts. A large chunk of my budget went on obtaining a pair of Taylor 572B's from RF Parts in USA and these proved to need considerably less drive and provided more power. (In use these are conservatively run at 250-300 watts on CW)

Nearly all the amps of this vintage required a drive source capable of keying the PTT line at high voltage or current - in older transceivers this was achieved with a mechanical relay which was not sensitive to polarity and could cope with the required current. Modern rigs largely rely on switching transistors to key the amplifier and in most cases (as with my K3) will only tolerate a positive voltage. As it left the factory the KW1000 required the ability to sink a negative voltage and some 500mA of current to kick it into life. It is an easy matter to change the keying voltage from negative to positive by simply reversing one diode and one electrolytic capacitor, but a fairly hefty current still requires sinking. The addition of an PNP power transistor and two resistors reduced the requirement to a few milliamps. See the modified circuit diagram.

Two small modifications were made to make the amp more user friendly.

1. The captive mains lead supplied was more suited to an industrial cooker than to equipment consuming less than 5 amps. As can be seen from the picture below there was sufficient space to install a modern 3-pin IEC socket for mains power.

2. The PTT socket was an odd two-pin arrangement and I didn't possess anything remotely suitable that would fit. The original was removed and replaced with the ubiquitous RCA phono socket. Now, every PTT lead in the world will fit :-) 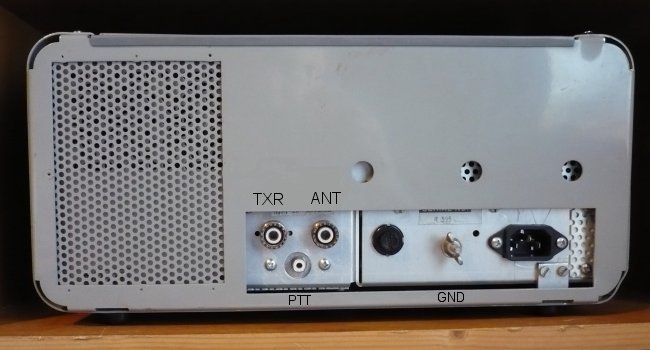 As of March 2010 the amplifier has been in use for about a month. I have to say that 95% of the time I run the K3 barefoot, but when a little more power is required this has proved to be very cost effective solution.

I rarely use any mode other than CW, and when required, a power level of 250-300 watts has proved quite adequate to attract the attention of the DX stations.